Climate Action – Engaging the Next Generation

A Conversation with Bill McKibben, James Balog, John Adams and others 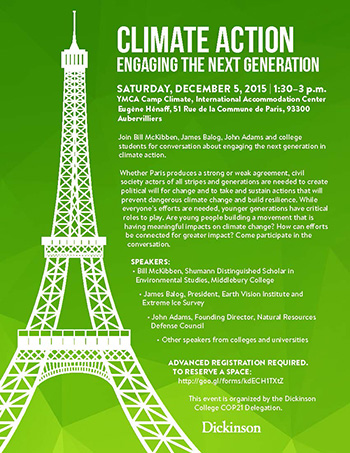 Join Bill McKibben, James Balog, John Adams and others for conversation about engaging the next generation in climate action. Whether Paris produces a strong or weak agreement, civil society actors of all stripes and generations are needed to create political will for change and to take and sustain actions that will prevent dangerous climate change and build resilience. While everyone’s efforts are needed, younger generations have critical roles to play. What are young people doing on climate change? Are they building a movement that is having meaningful impacts? How can efforts be connected for greater impact? Come participate in the conversation. This event is organized by the Dickinson College COP21 Delegation.

Bill McKibben is an author, environmental activist, founder of 350.org and winner of multiple environmental awards, including the 2012 Rose-Walters Prize for Global Environmental Activism at Dickinson College. He is currently The Shumann Distinguished Scholar in Environmental Studies, Middlebury College.

James Balog, the founder and president of the Earth Vision Institute and Extreme Ice Survey, is an accomplished photographer whose work documenting the effects of climate change on glaciers is featured in the films Extreme Ice and Chasing Ice. He is the winner of multiple environmental awards, including the 2014 Rose-Walters Prize for Global Environmental Activism at Dickinson College.

John Adams co-founded the Natural Resources Defense Council (NRDC) in 1970 and served as the executive director and president as it grew to be one of the most effective environmental organizations in the Unites States. He was awarded the Presidential Medal of Freedom in 2011. John continues to be active with NRDC as its Founding Director.

Jacob Scherr is Senior Producer of HUMAN ENERGY. He was an attorney and director for NRDC for almost four decades addressing the full range of global environmental challenges. In 1989 he initiated NRDC’s climate change advocacy work . He has been engaged in all the major UN conferences on climate and sustainable development since the Rio Earth Summit in 1992.

Neil Leary directs the Center for Sustainability Education at Dickinson College and coordinates efforts to integrate sustainability learning throughout Dickinson’s educational programs. He teaches courses on climate change and has taken students to several UNFCCC COPs. He has been a lead author, review editor and technical support unit head for the IPCC, which was a co-recipient of the 2007 Nobel Peace Prize.

Elizabeth Plascencia is a Posse Los Angeles and NSF-STEP scholar majoring in the Earth Sciences at Dickinson College. Shas participated in research initiatives in Iceland, Canada, Cuba, Peru, and New Zealand and attended COP20 where she conducted research on climate change education, outreach, and public participation within the UNFCCC work program.

Anna McGinn graduated from Dickinson College with an Environmental Studies degree in 2014 and is now working at the college as the coordinator for campus recreational programs where she is developing the Dickinson outdoor education program. She attended COP17 as a part of the Dickinson delegation, and she is here at COP21 to research the climate change adaptation-conflict nexus.